The AVR32 architecture defined by Atmel is a 32-bit RISC load/store architecture. There are several different versions of the core.  Atmel currently supplies two classes of AVR32 cpus:

As I am most interested in CPUs that can run Linux, this review will focus on the AP7 (AVR32 AP) class devices.

It seems that AVR32 is Atmel’s answer to ARM Cortex.  Some features of the AP7 devices:

The NGW100 development board is available from a number of distributors (including Digikey) for about $70.  The board includes the following major components: 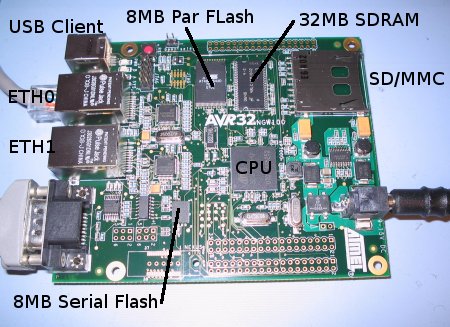 Atmel is directly supporting the development effort for the AP7 processors.  They seem to be doing it right in that they are pushing support directly into the mainstream kernel.  Currently, Atmel provide patches for GCC and uClibc.  There is already efforts underway to provide AVR32 support in Openembedded, which will enable developers to quickly build full featured Linux distributions for AVR32 based products.

It will be interesting to see how the AVR32 based products work out.  On one hand, one could argue that a custom architecture like AVR32 can’t succeed as it does not have an extensive ecosystem of tool vendors in place like ARM and MIPS.  But, the availability of open source software such as GCC and Linux is rapidly lowering the barrier to entry for creating tools for new architectures.  No longer do you need to wait for commercial tool vendors to provide software support.  The model for software development is changing.

In comparison to Atmel’s AT91SAM parts, its difficult initially to see what the AVR32 parts offer over the SAM parts.  For one, they are lacking a USB Host port which is becoming increasingly important to have in embedded Linux systems.   Perhaps they offer other advantages such as lower cost and power.  As we gain experience with these parts, I’m sure we’ll find applications where they are an excellent fit.